A Painting of Ennis

In 1820 a travelling artist, William Turner de Lond, came to the town of Ennis.

He produced a painting of the town centre depicting the courthouse and marketplace which is the best surviving pre-photographic image that we have of the town. 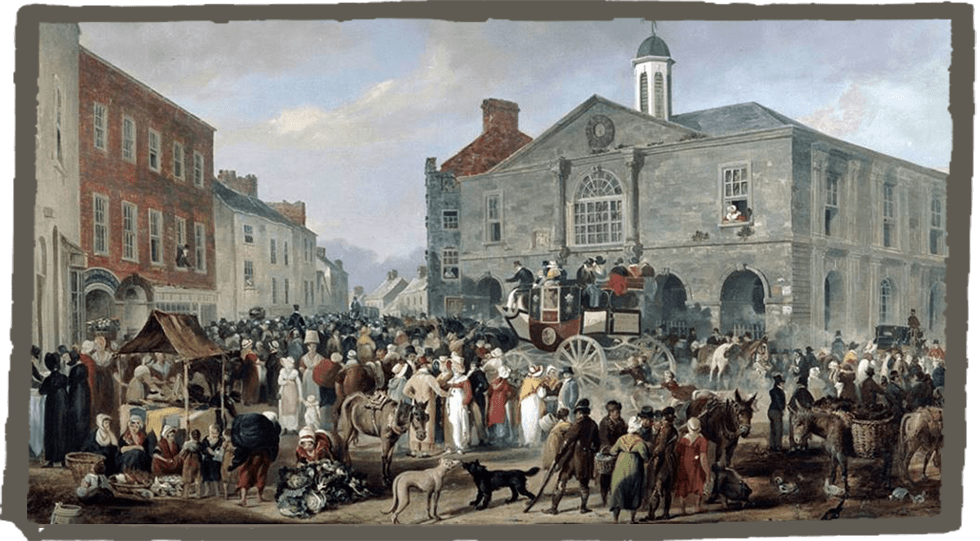 The bustling scene depicted in the painting encapsulates not only the essential function of the town as the commercial and judicial centre for Clare but also reveals, through his vivid detail of the market goers, the various strands of the community that made up the vibrant life of Ennis during this time period.

The main focus of the painting is the courthouse and town square – at the time called Exchange Place and now O’Connell Square. The area is known by generations of Ennis people as “The Height” – it comes from the Irish name “Bárr na Sráide” which translates as “the height of the street” as this was and is the highest point of the towns three main streets and was well above flood water level. Dominating the space at that time was the town courthouse which was the centre of justice for the county. Built in the mid eighteenth century to replace an older courthouse on the same site, it was built in the classical style and consists of two storeys with the ground floor incorporating a series of arches which open onto the square. 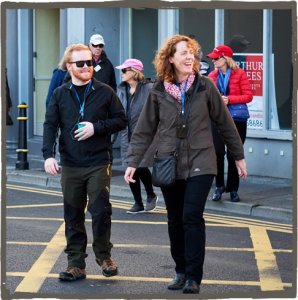 Previously these covered areas had been used by the town’s traders but by this time had been railed off. A cupola with weather vane mounts the roof and the town clock is visible on the front façade (townspeople would have used this to set their timepieces – Ennis local time was approximately 11 minutes later than Dublin time until 1859 when Dublin time was adopted). The courthouse was the focal point of the community and held not only the assizes and courts but also schools, dances and public assemblies. The mail coach was the town’s only regular communication with the outside world. It ran daily from Limerick to Ennis and can be seen drawn by four horses and carrying a number of passengers.

However, possibly the most interesting aspect to the painting is the weekly market and the artists vivid portrayal of the market sellers and buyers. Our eye is drawn to the centre of the painting where the well-dressed gentry in their brightly coloured clothes complete with top hats and bonnets appear to be happily catching up with the social gossip of the time. If we drag our eye away from this scene we can also see women squatting on the ground selling eggs and cabbages, dairy maids selling milk from pails balanced on their heads, turf being sold from baskets slung over donkeys and lengths of cloth for sale from side-street stalls. All of Ennis life seems to be portrayed here from the well off to the ragged labourer and, if you look closely, you can make out the desperate barefoot vagrants that chase after the mail coach perhaps in the hope of a coin being thrown from the passengers seated above. Eventually with continuous use the courthouse fell into disrepair and with the rapid growth in population its size was deemed to be inadequate and the decision was eventually taken to demolish it and rebuild a new courthouse on the outskirts of town in Lifford. We are fortunate therefore to have this wonderful painting as a record of our town at this time.